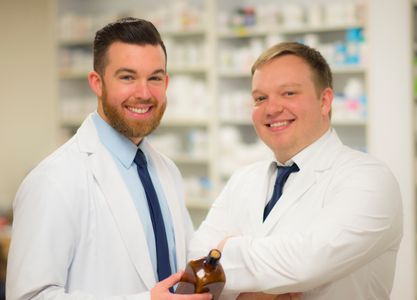 Your Journey to Health and Wellness Starts Here

Colby is from Virgie, Kentucky and is a 2007 Shelby Valley High School Alum where he played football. He obtained his undergraduate from Emory and Henry College in Abingdon, Virginia gaining a Bachelor of Arts in Chemistry. In 2015, Colby earned his Doctorate of Pharmacy at East Tennessee State University’s Bill Gatton College of Pharmacy. Colby is also employed at ARH Highlands Medical Center where he is a clinical pharmacist. He is married to his high school sweetheart Ashlie. Together, they have a five-year-old daughter, Emerie Alivia and a three-year-old son, Isaac Asher. Colby is a Crossfitter and enjoys outdoor adventure activities.

Donovan grew up in Dorton and graduated from Shelby Valley High School in 2007. After graduating from Alice Lloyd College in 2011, Donovan went on to graduate with his Doctorate of Pharmacy from Appalachian College of Pharmacy in 2014. He has been married to his wife Katie since 2011 and they have a 5 year old son Tucker and 3 year old daughter Kensington.